Can you recall when you first became interested in singing and performing?

Undoubtedly, music was always something that was a big part of my family. So from a young age, I was exposed to lots of Irish traditional music and my Dad’s music in the car.

My first album was Christina Aguilera and I would always try to copy her riffs and runs and eventually started to pick some things up.

But I think the first time I knew I wanted to become a singer was when my Dad played Mariah Carey’s “Vision Of Love” live at the Grammys performance. I was fascinated by her voice and how she used it too.

What did that lead to?

Clearly, It led me to pursue this tiny dream I made at 11 years old and over the years. With hard work and determination from vocal lessons and singing competitions, it led me to become the singer I am today.

I am studying music in college and performing all over the country in big music venues like Dolans, Workmans, and The Button Factory.

You were a student here at Voiceworks Studio for a few years with the lovely Lisa Curran. Have you any special memories of your time with us?

Lisa Curran was the catalyst that helped me shoot my career in the right direction with some amazing contacts and her 100% belief in my talent.

In fact, I will forever be grateful for what she has done for me and what Voiceworks Studio offered me.

And I think the most special memory is when I got to perform Let It Go with the younger students in Killarney Voiceworks in 2017. It was my last concert as a student and it really put into perspective how much I had grown as a person, singer, and artist. To have these 6-10-year-olds in front of me knowing that they now could have the same dream as I did at that age is amazing.

What’s the proudest moment for you so far in your singing journey/career?

Well, the proudest moment in my singing journey so far is getting a record to no. 1. Like I remember waking up and checking the charts and it was a real full-circle moment for me. It was my mother’s birthday so she would have been 46 years old, it was very special for me. It’s a moment I’ll cherish forever.

What are your current musical goals?

At this time, I think I would like to keep making music that I love and completely resonate with. I will hopefully have an EP or an Album out this time next year and will be heading into my final year in BIMM Dublin.

6. We love the new single “To Be With Him”. What was the creative process for this track?

Songwriting for me doesn’t feel like work. It consists of stories from my life, how I saw them in the past, and how I see them now in a new light.

Every time I sing my songs they hit me in different ways. Honestly, I first wrote “To Be With Him” as a poem (  nearly 2 pages of lyrics). I honed in on words or lines that I felt at that time were right for the song.

I called my friend and sent him a little melody I came up with and he put chords to it. Within the hour we had the entire song written. I also believe that you can’t force songwriting, it has to be real and has to come from you, whenever it feels right.

What famous musicians do you admire?

In my younger years, I listened to a lot of Christina Aguilera and Miley Cyrus but the artist that influenced my style the most would have to be Mariah Carey.

I could sing every lyric, run, and whistle tone within a split second of hearing the performance. Also the year and the place it was held. I was “obsessed” maybe (awful Mariah Carey joke).

What advice would you give to up and coming artists/singers that want to pursue music as a career?

I think the biggest advice I can give is don’t let anyone tell you can’t do something. A lot of people will try to knock your dream. Don’t let them. Keep up the hard work and with the right drive and motivation, you will get there.

I never won a singing competition nor did I get past the judges on the X-Factor, The Voice, or BGT auditions. But I kept going and never gave up. Believe you can do it even if no one else does. Trust me.

What is your favorite part of being an artist?

Definitely, the best part about being an artist is seeing how people interpret your songs and how some songs are a form of therapy for people. And sometimes can even save a person’s life.

Indeed, it’s the most rewarding feeling.

You can now stream “To Be With Him” – GER on Spotify

Click on the Image to check out his Debut Single To Be With Him on Spotify! 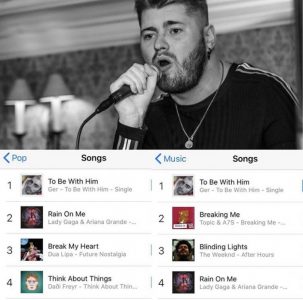 Bairbre Diamond
Amazing place with fantastic, really knowledgable coaches. If you are interested in singing, whether a hobbyist or professional this place will help you reach your goals. Apart from individual lessons, there are great group classes and choirs as well as performance opportunities. I love being a student at Voiceworks

Christina Black
Thanks to all the fantastic team at Voiceworks! So - oooooh looking forward to next term. ... It's been a wonderful experience on my journey singing and meeting such lovely inspiring people along the way 🙏🎤🎵🎶🎼🎹🎸

KAY CURTIN
Provides wonderful and unique performance opportunities while also the student is receiving a very high standard of vocal tuition from the best, most qualified teachers. There are so many options and possibilities, from girl bands to guitar tuition to performance workshops, this studio is truly the best place for anyone who wants to learn to sing.

Roisin Mehigan
My son started in Voicworks in January to help with his vocals for his Junior Cert practical exam, he had 1 on 1 lessons with Lorna, as parents it was lovely listening to him practice his songs and seeing the progress he made every week. He was confident in his song choices for his exams and is looking forward to September and seeing what he can achieve with voiceworks help.
Google rating score: 4.8 of 5,
based on 12 reviews.
Ger O'Hanlon | Throwback Thursday - Voiceworks Studio
Read More This website uses cookies. We'll assume you're ok with this, but you can opt-out if you wish. Cookie settingsACCEPT
Privacy & Cookies Policy