Can you recall when you first became interested in singing and performing?

I can’t remember the exact moment when I became interested in singing because my family was always very musical but I definitely remember writing my first song when I was seven.

What did that lead to?

I kept writing and took singing lessons for years. When I finished school I moved to London and that’s when the music started to kick off for me.

You were a student here at Voiceworks Studio for a few years. Do you have any special memories of your time with us?

I think I was about twelve when I started lessons at Voiceworks. I was so young at the time that I had very little experience on stage and no experience singing on camera. While the best memories with Voiceworks were those times when I was pushed completely out of my comfort zone. Like I learned so much from feeling those nerves and trying to overcome them.

What’s your proudest moment so far in your singing journey/career?

Last year was pretty great because I started earning from session work and performing. I think that’s always going to be a great feeling. I was flown to the Caribbean by a company called ERT to perform at two Sandals resorts. And that would have to be at the top of the list.

What are your current musical goals?

What is your creative process as an artist and how do you approach songwriting?

Songwriting is a funny thing. It can be very strategic in a room with ten other people, constructing the song like a jigsaw puzzle with rules or it can be extremely personal. Neither way is better than the other. Great songs have been made with both approaches. I personally prefer writing by myself or with one or two other people. I think it makes the process more enjoyable and pure but that’s just my opinion.

What famous musicians do you admire?

Wow loads. I think Finneas is a musician/writer that most people are trying to match at the moment. I’m also a fan of Jessie Reyes, JP Saxe, Julia Michaels, Ashe, I could go on.

What advice would you give to up and coming artists/singers that want to pursue music as a career?

I would definitely say to be persistent. It can take a while to be heard but you definitely won’t be heard if you stop.

I would also say to work on your craft. At the end of the day, if you want to become a well-known artist, you need to make the music that your instrument (voice) can show off – both are equally as important as the other.

What is your favorite part of being a performer?

My favorite part of performing is probably the energy in the room when the audience falls silent or becomes focused. I had so much performance anxiety when I was younger that I wasn’t able to enjoy it at all but it became a completely different experience once that fear left me.

Where can we learn more about you!? ( Insta? Facebook? anything you want to promote? ). 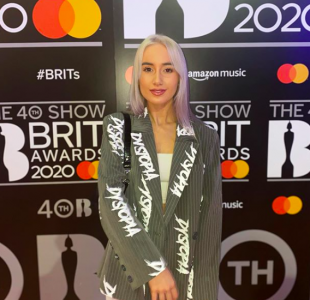 Bairbre Diamond
Amazing place with fantastic, really knowledgable coaches. If you are interested in singing, whether a hobbyist or professional this place will help you reach your goals. Apart from individual lessons, there are great group classes and choirs as well as performance opportunities. I love being a student at Voiceworks

Christina Black
Thanks to all the fantastic team at Voiceworks! So - oooooh looking forward to next term. ... It's been a wonderful experience on my journey singing and meeting such lovely inspiring people along the way 🙏🎤🎵🎶🎼🎹🎸

KAY CURTIN
Provides wonderful and unique performance opportunities while also the student is receiving a very high standard of vocal tuition from the best, most qualified teachers. There are so many options and possibilities, from girl bands to guitar tuition to performance workshops, this studio is truly the best place for anyone who wants to learn to sing.

Roisin Mehigan
My son started in Voicworks in January to help with his vocals for his Junior Cert practical exam, he had 1 on 1 lessons with Lorna, as parents it was lovely listening to him practice his songs and seeing the progress he made every week. He was confident in his song choices for his exams and is looking forward to September and seeing what he can achieve with voiceworks help.
Elizabeth Murphy | Throwback Thursday - Voiceworks Studio
This website uses cookies. We'll assume you're ok with this, but you can opt-out if you wish. ACCEPTCookie settingsRead More
Privacy & Cookies Policy